The fava bean (vicia fava) is one of the more popular and interesting items found on St. Joseph Altars.

In Sicily, the fava was fodder for cattle. During a great famine the people resorted to eating them to survive. They were considered lucky to have favas to eat, hence the fava bean is also known as a "lucky bean." Some believe that the pantry that contains a fava bean will never be bare. The fava, or lucky bean, serves as a token of the Altar - a reminder of God's provisions through the intercession of St. Joseph.

Fava beans, also known as broad beans, pigeon beans, horse beans, and windsor beans, are one of the oldest cultivated food plants. They have a distinct flavor and creamy texture. This member of the pea family is popular in Mediterranean cuisine, and can be eaten year round. 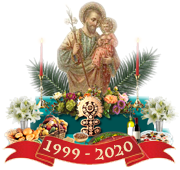